From 23 to 26 July, the 9th IAS Conference on HIV Science was held in Paris, France. 6,000 researchers, advocates, policy makers, funders and community leaders, including APCOM’s Executive Director Midnight Poonkasetwattana, which was kindly supported by WHO, attended the Conference.

The conference has generated in the following main outcomes:

1) The future is injectable, as treatment for HIV and its co-infections continues to improve

The quest for better, easier-to-take treatments for HIV and related diseases continued its advance this week at IAS 2017. Results from the 96-week LATTE-2 study on a long-acting, injectable HIV treatment regimen raised the prospect that monthly or bimonthly injections of antiretroviral therapy (ART) could soon replace daily pills for people living with HIV, while a report from HPTN 077 supports the prospect of long-acting injectable pre-exposure prophylaxis (PrEP) as well.

2) The prevention toolbox goes bigger and broader, too

A Phase 1/2a vaccine study called APPROACH evaluated seven different “prime boost” HIV vaccine regimens and identified the most promising candidate for an upcoming proof-of-concept efficacy study. A new subgroup analysis of the IPERGAY study supports the on-demand use of PrEP for men who have sex with men (MSM), even if they have sex less frequently. Evidence builds that HIV self-testing can play a vital role in supporting rapid linkage to care for key populations, including female sex workers. And a large study in serodiscordant MSM couples supports the growing body of evidence that “Undetectable = Untransmittable (U=U)”.

On the eve of IAS 2017, UNAIDS announced that a record-setting 53% of adults living with HIV worldwide were accessing therapy in 2016, and AIDS-related deaths have dropped by nearly 50% since 2005. As a growing number of countries reach or approach the 90-90-90 targets, however, numerous studies here highlighted regions, countries and populations that are not receiving the benefits of advances in HIV prevention and treatment.Science matters… and so does money.

4) Science matters… and so does money.

IAS set the tone for the week with the launch of the Paris Statement, which reiterated that “scientific knowledge is the backbone of the HIV response” and called for “an unfaltering commitment to research. A new Kaiser Family Foundation/UNAIDS report showed that donor government funding for HIV fell 7% last year to the lowest level since 2010, while the Resource Tracking Working Group found the lowest annual investment in HIV prevention Research and Development in more than a decade. Advocates and policy makers meeting here called for concerted efforts to reverse the cuts and promote the tremendous impact, seen in hundreds of presentations at IAS 2017, of investing in HIV R&D, treatment and prevention. The Paris statement can be found here. 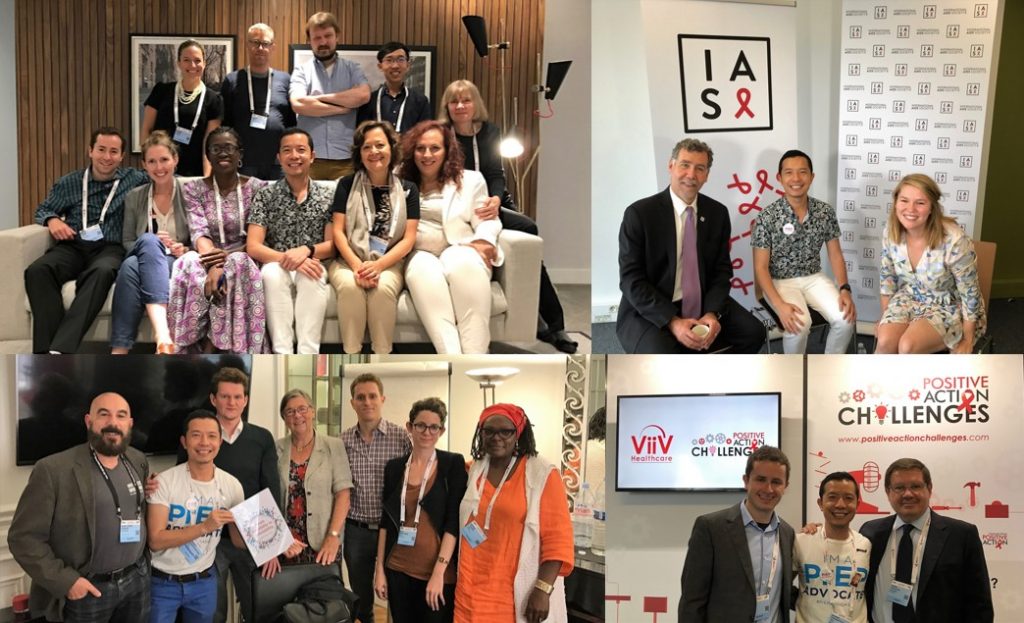 As an organisation that has been advocating PrEP for MSM in the region, it was extremely encouraging for APCOM to witness the firm attention on PrEP in IAS Paris 2017. Since 2014 and last year’s AIDS 2016 Durban conference many more countries have shown interest to roll out PrEP, yet the hurdles that prevent a large scale roll-out still remain. Affordability, availability and investment relating to the anti-HIV medicine are the epitomai of such hurdles. IAS Paris 2017’s highlight reiterating that PrEP is working and has to be part of the toolbox in the fight against HIV, especially among key populations, is the reassurance we need to hear.

IAS Paris 2017 paints a strong picture of APCOM’s PrEP advocacy work since the AIDS 2014 Melbourne through our facilitation and presentation by Executive Director (ED) Midnight Poonkasetwattana in numerous sessions.

Firstly, ED Midnight co-chaired a distinguishing panel on global PrEP implementation, organised by WHO. The session aimed to disseminate the new WHO’s PrEP Implementation Tool and to discuss the progress with implementation as PrEP programmes move beyond demonstration projects to wider implementation. Speakers of the panel included her Excellency Deborah Birx, the U.S. Ambassador for the President’s Emergency Plan for AIDS Relief (PEPFAR), Dr Rachel Baggaley of WHO, and Dr Andrew Grulich, who gave a presentation on PrEP study among 6,000 Australian gay men – the largest PrEP study in Asia Pacific region, to date.

…more champions on PrEP use need to stand up and explain to the community why they were using PrEP.

Secondly, APCOM shared a knowledge at the “PrEPping Men Who Have Sex with Men (MSM) for Better Health Outcomes: A Conversation between Healthcare Providers and their Clients” session. The session covered present-day topics around HIV prevention for MSM such as PrEP, dating apps, chem sex, and condomless sex. Executive Director Midnight Poonkasetwattana presented the perspectives from the MSM community in Asia on sexual pleasure and risk reduction. Midnight suggested that to really have a breakthrough in Asia and the Pacific more champions on PrEP use need to stand up and explain to the community why they were using PrEP. A strong presence of PrEP champions would demystify PrEP and convey the message that PrEP was a viable option in the HIV toolkit, regionally and globally.

The session also brought up conversations with PrEP users and service providers, including with Dr Nittaya Phanuphak of the Thai Red Cross AIDS Research Centre, Thailand, who presented updates on the various PrEP projects in Thailand, which had provided PrEP to 3,000 MSM and transgender persons.

Thirdly, Midnight and International AIDS Society President Chris Beyrer engaged in IAS Conference’s Facebook Live talkshow on PrEP. Both experts emphasised the high efficacy of PrEP and concluded that the political will to scaling up PrEP, locally and globally, should not be postponed any longer.

APCOM was also invited by WHO to join the Global PrEP Coalition that was launched during the Conference. This new coalition aims to share information across PrEP project sites and how to involve the community in these projects. APCOM itself will organise another PrEP push around its 10thanniversary in November, as a follow-up on the successful regional PrEP consultation and the community work following it.

“… it [is] the time to end the rhetoric about strengthening communities.”

Another coalition, End AIDS Coalition (EAC), was also commenced in the Conference. EAC is a cross-sector, non-partisan coalition that is fostering unprecedented collaboration, transparency and accountability. Building on the work of partners, the Coalition will focus the global AIDS response around ending the epidemic by 2030; help aggregate and amplify the work of partners, identify barriers, encourage efficiencies and ultimately create a movement that inspires everyone everywhere to be part of the solutions. Executive Director Midnight spoke at the launching ceremony reminding the coalition members to support community initiatives that had already started. Midnight emphasized that it was the time to end the rhetoric about strengthening communities, as it had not happened, and would not ever happen without the will and actions to resource communities to levels for them to do the work and make the community efforts sustainable.

Another APCOM’s contribution in IAS 2017 Paris was to participate in the technical working group on HIV self-testing. For a long time, APCOM has been advocating the access to self-testing kits through oral fluids or a finger prick. While the prevailing stigma and discrimination in healthcare settings are still preventing people to take the test, self-testing would be the solution to the crisis of low testing uptake. In the working group, APCOM presented its four in-country study reports on HIV self-testing. The studies conclude that there is a high demand in the community to be able to do testing outside clinical settings.

APCOM supports the Paris Community Declaration and would encourage other organisations in Asia and the Pacific to become signatories of the Declaration by clicking here.

IAS 2017 Paris also marks the adoption of the Paris Community Declaration, which was commenced in the “IAS 2017 Community Actors Symposium on Key Populations: Share positive and effective experiences on Key Population involvement” session. The Declaration mainly aims to renew the 1983 Denver Principles and the GIPA Principles (Nothing About Us, Without Us) and to extend them to all Key Affected Populations, living with or affected by HIV, integrating by the way the new outcomes of the fight against HIV/AIDS that are PrEP and TasP. APCOM accordingly supports the Declaration and would encourage other organisations in Asia and the Pacific to become signatories of the Declaration. The signing can be done online by clicking here.

Throughout the Conference, APCOM also explored an extended partnership with International AIDS Society (IAS), the organiser of the Conference. ED Midnight had various strategic meetings with their key staff and, propitiously, the IAS will support APCOM’s 10th anniversary (#ToThePowerof10) celebration by sponsoring an educational seminar that would be part of the many community seminars held for the anniversary.

Last but not least, APCOM also took part in the side gathering held by Robert Carr Network Fund to discuss the sustainability of the funding mechanism among their grantees, as well as in the meetings with other donors and supporters on our proceeding and planned activities, such as with Expertise France to report the updates on the PULSE project – APCOM’s ongoing community-led research and advocacy project to generate information and to improve access of young gay men to HIV services.