By Safir Soeparna May 30, 2017 Showcase
No Comments

The Humsafar Trust (Humsafar), our partner under the Multi-country South Asia Global Fund HIV Programme (MSA) based in Mumbai, India, convened events to observe International Day against Homophobia and Transphobia (IDAHOT) across six different Indian states. Supported by the same grant, Humsafar collaborated with various local community-based organizations to commemorate the Day that has a global theme of family acceptance. Below is the highlight of their IDAHOT events. 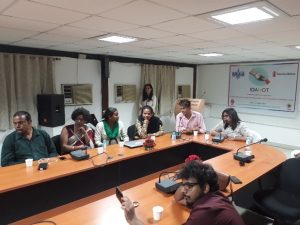 LGBTQ theme film screening and panel discussion on family acceptance was organized at Indira Gandhi Rashtriya Manav Sangrhalaya on 13th May, 2017 in Bhopal. This event was organized in collaboration with Bhopal Pride March committee. It marked the beginning of LGBTQ Pride week in Bhopal. Harish Iyyer, LGBT activist,  Koninika Roy, Advocacy officer of The Humsafar Trust, local LGBT community leaders Sanjana, Abdul Majid khan and Devi were panelists for panel discussion in which they discussed the  challenges faced by LGBTQ community in terms of family acceptance and how to overcome them. Local community leaders brought forth important aspects of struggles of LGBTQ community in small city like Bhopal.

A daylong event was organized in collaboration with Queerythm, LGBTIQ support group based in Thiruvananthapuram at Science and Technology Museum Conference Hall. The programme was organized as a series of panel discussions.

Session on “Media and Gender Justice: Queer Interventions” included the panelists, documentary filmmaker Vidhu Vincent and Shibu Thomas of the Humsafar Trust. The session highlighted that media should give greater coverage to LGBTIQ issues but such coverage should be free of biases about them prevalent in “mainstream” society both at the implicit and explicit levels. This was followed by a documentary by P Abhijith on the celebrated TG TV star, Soorya and her friends about the tortuous journey they had to undertake to change their gender and make a living in a world that was intolerant of anyone trying to live outside the him/ her  binary. This movie is aptly titled in Malayalam as Avarileykkulla Dooram (literally, ‘The Long Distance to Her’). There was an exhibition of queer-themed photos by Jalajith Thattoli as well as a small exhibition of books and periodicals outside the hall.  Session on “Society, State, Sexual and Gender Minorities” had panelists Mohammed Unais, Bincy and Sheetal Shyam who shared their personal experiences of homophobia, transphobia and biphobia in mainstream educational institutions and other public spaces.

Session on “Visibility of Sexual Minorities” featured Shalin Varghese, Gopi Sundar,Vijayarajamallika, Beena, Sreekutty and Vihaan which underlined the diversity of the LGBTIQ community in terms of class, location, language and several criteria that have nothing to do with sex organs.

Kodiyeri Balakrishnan, former Home Minister of Kerala and current State Secretary of the Communist Party of India (Marxist) expressed solidarity and responsibility towards sexual and gender minorities in the State. He assured his government will declare Kerala as a friendly state for sexual minorities and will become a model for the whole nation.

The function was inaugurated by Education minister, Th. Radheshyam. Vivek Anand, CEO of The Humsafar Trust, Mumbai gave the welcome address for the function.

A panel discussion on the topic “Issues of Family and LGBTIQ of Manipur.” was conducted chaired by S Bhubol, Managing Director of Shintha. K Saroja, Deputy Director (training), Department of Social Welfare, Government of Manipur, Nadini Thokchom, Director Women and Child, Indigenous Perspective, Imphal including parents of Nandeibam Sandra and Pavel Sagolsem share their experiences over the issue.

Pavel’s mother Mrs Sagolsem Bidyarani Devi shared her experience of her sons coming out.  She expressed that even though she was in a dilemma when he told her about his sexuality but time only made her realize that regardless of sexual orientation he is her child and will always support him in his fight. She shared her experience of walking the Delhi pride in 2016 and proudly says she is a proud mother of a special child and requests other parents of LGBT children to come out and support their child.

The event ended with the cultural dance performance by some renowned transgender artistes led by RK Sanaton and vote of thanks by Managing Director of Sintha Handloom and Handicrafts, Manipur.

On the International Day against Homophobia, Transphobia and Biphobia Shamakami came up with the theme “Desiring Equality” where LGBTQI people’s desires for equality starting from their Family to the Society. The Chief Guest for the Day was Shri. Jemino Mawthoh, MLA, Nongthymmai Constituency who graced the program stated that he was glad he could be a part of such an event which is commemorated for the first time in the city of Shillong. Shri. Wanlura Diengdoh, Member Secretary, Meghalaya State Legal Service Authorities (MSLSA) expressed that the Legal Service Authorities have started the process of extending legal services to the LGBT and sexually marginalized population in the State of Meghalaya. The Member Secretary expressed that there should be more awareness programs for people to know about the issues of the LGBT population for acceptance which will bring about respect and dignity for the community at large. Shri. Murugesan Sivasubramanian, Project Director, Project DIVA-MSA, Humsafar Trust, Mumbai introduced the concept of IDAHOT, The Humsafar Trust and its journey till now. Short films and documentaries revolving around the issues of Gender and Sexuality were screened, after which there was open house discussion. Panel Discussion on health, legal and human rights of LGBT had four experts as panelists and discussion of relevant issues took place according to their field of expertise. The day was marked by cultural traditional dance, song, contemporary dance by the students from Social Work Department, Martin Luthar University presenting messages on same sex love and relationship and how society stigmatizes them. 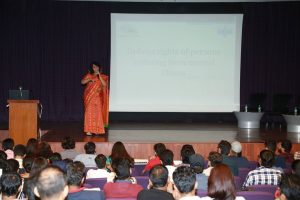 On the 20th of May 2017, the American Center in Delhi for the first time saw an incredibly diverse community walk in proud and excited to attend The Humsafar Trust’s (HST) event “Sweekar – Towards LGBT Acceptance”. More than 150 participants from the LGBTQ spectrum attended the event. Participants even traveled from as far as from Punjab, Haryana, Chandigarh and parts of western UP to attend this event. Some of the LGBTQ persons even came together with parents, co-workers and friends in support. The purpose of the event was to highlight the fact that doctors, psychologists and other quacks can no longer claim to cure same sex attraction and/or gender identity.

Tinesh Chopade, Asst. Program Manager, welcomed the audience and provided overview about MSA programme implemented by The Humsafar Trust. Yashwinder Singh, Manager of the newly inaugurated Delhi Office of the Humsafar Trust provided a brief history of the International Day against Homophobia and Transphobia (IDAHOT). He further stressed how visibility remains a challenge for the community especially in a country where the Apex court has declared it a ‘minuscule minority’.

Richa Vashista, clinical psychologist and research interventionist at the Humsafar Trust, led a discussion about the newly assented Mental Healthcare Act 2017. She highlighted how the Act positively impacts the community and how it is a client-centric act. A panel discussion on the importance of Acceptance of LGBTQ was conducted with Suraj Sanap of the Lawyer’s Collective, Manavi Khurana, a psychologist and Sarita Verma, a supportive mother of a gay child. 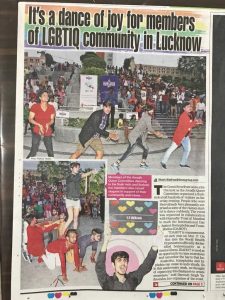 A flash mob was co-organized with the Awadh queer LGBT group to mark International day against homophobia and Transphobia. The flash mob was chosen to spread the message about the familial acceptance of LGBT members and rainbow families as this year theme of IDAHOT was focused on reaching maximum number of family members and spreading awareness about the challenges face by LGBT member and families. Flash mob is the best medium to connect maximum numbers and spread the thematic message of IDAHOT. 13 minutes Flash mob was well appreciated by the people on the spot venue i.e. of Gomati river front. It received huge round of applause. The event went well and concluded up with sloganeering by Awadh queer group such as ‘’Kon sa Kanun Sabse Battar 377-377” (Which law is worse? It’s IPC 377), “I am gay. That’s ok” etc. It was observed that after sloganeering at the venue audience in the crowd mingled with queer community and danced with them which showed their support and concern.