Pride In The Humanitarian System: Promoting Inclusion And Rights For LGBTIQ People In Disaster Preparedness And Response

Bangkok, Thailand — A long-neglected component of resilience-building, response and recovery in humanitarian settings is the need to include lesbian, gay, bisexual, transgender, intersex and queer (LGBTIQ) communities. 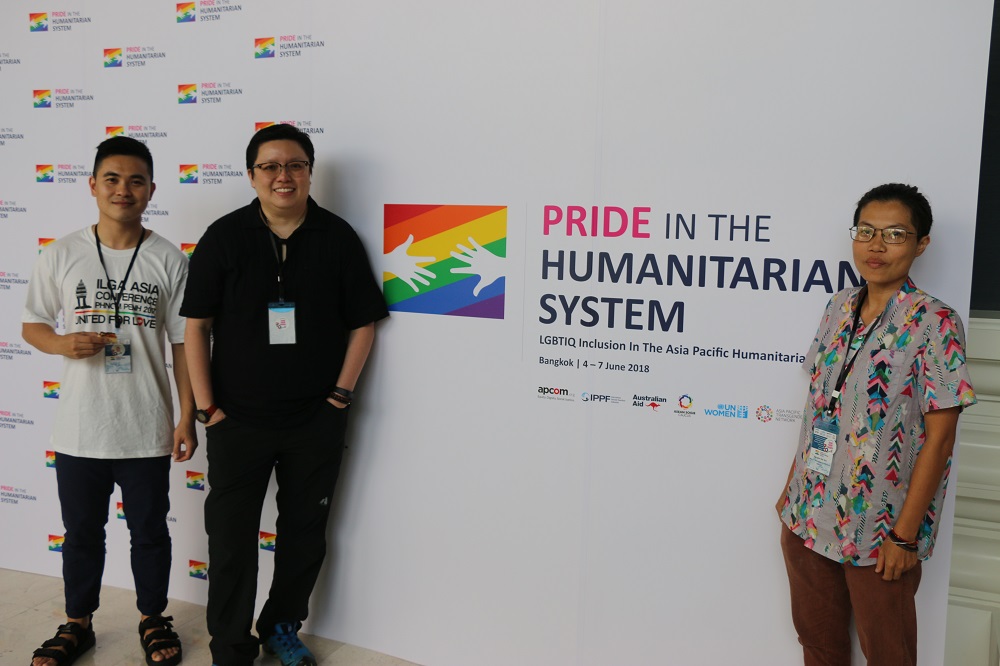 Next week over one hundred LGBTIQ activists from twenty countries from Afghanistan to the Cook Islands will meet with international humanitarian organisations to call for action on the exclusion of LGBTIQ+ people from many aspects of humanitarian preparedness and response.

This is a critical issue in the Asia-Pacific region, an area impacted by an increasing frequency of disasters such as cyclones and typhoons, as well as disasters related to earthquakes and tsunamis. LGBTIQ people have reported being left out of disaster responses in Japan, Indonesia, India, Fiji, the Philippines and other disasters.

“It is well documented that disasters and crises have differential impacts on the lives of women, men, and persons of diverse gender identities,” explained Smriti Aryal, Regional Advisor for Humanitarian Action and Resilience Building at UN Women. “Very often, pre-existing inequalities, discrimination and violence are exacerbated in humanitarian settings, putting those who are already most vulnerable at further risk. Multiple forms of discrimination, including those based on sexual orientation, gender identity and expression, and sex characteristics, and the policing of sexuality, continue to be barriers in achieving gender equality in peace, development, and humanitarian settings. Recognizing and addressing the root causes of these barriers is fundamental to both making humanitarian response more effective and reaching the goal of leaving no one behind.”

Over the last decade violence and discrimination against people on the basis of the diversity of their sexual orientation, gender identity and sex characteristics has been recognised as violation of human rights. This includes the development of the Yogyakarta Principles and resolutions of the UN human rights council.

“These human rights instruments affirm that LGBTIQ populations are equally entitled to the same human rights as all other persons. However, in reality many UN Member States continue to discriminate against and actively perpetuate violence and other harms towards LGBTIQ persons and communities,” noted Midnight Poonkasetwattana, Executive Director of Asia Pacific HIV and LGBT health community network (APCOM). “These harms are often amplified amid disasters and conflict, adding to our vulnerability and further jeopardizing our health and wellbeing.”

“Stigma and discrimination against us are rooted in patriarchal values that only reinforce dominant power inequalities. Heteronormative binary assumptions are built into the foundations of humanitarian response itself,” said Joe Wong, Program Manager for the Asia Pacific Transgender Network (APTN). “For example, shelter, toilet and bathing facilities that are segregated according to the traditional or binary gender definitions of male and female. Or the traditional definition of a household for distributing relief services that doesn’t acknowledge LGBTIQ family structures. Or even the issuance of identity cards that don’t recognise the very existence of transgender persons, making it difficult or impossible for them to access humanitarian supplies in many situations.”

“Sexual and reproductive health services are another essential aspect of humanitarian response currently neglected when it comes to LGBTIQ people,” added Maria Holtsberg, Senior Gender and Inclusion Advisor for the International Planned Parenthood Federation (IPPF). “Prominent global agreements, do include specific references to these critical services for affected populations, especially women and girls, but there’s practically no mention of LGBTIQ persons and communities, a glaring omission. Consequently, sexual and reproductive healthcare – rarely optimal in ‘normal’ circumstances – is even more inaccessible or unsafe for LGBTIQ communities humanitarian responses, often with disastrous results.”

In planning the consultation, examples of LGBTIQ exclusion in humanitarian response were collected from several Asia-Pacific countries to demonstrate their harmful impact, including the 2011 Japan Tohoku earthquake, 2015 Nepal earthquake and Cyclone Winston in Fiji.

“These stories are just the tip of the iceberg,” said Ryan Silverio, Regional Coordinator of the ASEAN SOGIE Caucus. “We must strengthen the collection of data to illustrate the myriad ways in which current humanitarian response mechanisms and protocols are failing our communities, so that we can better advocate for ways in which these challenges can be addressed. Using solid evidence to underscore issues pertaining to non-conforming sexual orientation, gender identity and gender expression is essential if we are to mainstream and integrate SOGIE issues in human rights mechanisms across the ASEAN region and beyond, including within the context of disaster preparedness, risk reduction and response. One concrete step is for humanitarian agencies to provide spaces to enable LGBTIQ persons affected by emergencies to share their stories; they should have a stake in any disaster risk reduction and management plans.”

“Addressing the rights, needs and strengths of sexual and gender minorities in crises is going to take a lot more than adding ‘LGBTIQ’ to the end of long lists of marginalised communities” contends Edge Effect’s Managing Director Emily Dwyer. “There’s also immense diversity within sexual and gender minority communities across the Asia-Pacific – there’s no single ‘LGBTIQ’ solution.”

“So how do we do it? We do it together. It means establishing enduring relationships with local sexual and gender minority communities and the CSOs that represent them. It means ensuring that community members are at the heart of design and decision-making.”