Led by the Center for Applied Research on Men and Community Health (CARMAH) under APCOM’s supervision, the campaign is named TestSGN, following the style of Bangkok campaign’s title (TestBKK) and using the 3-letter airport code of Ho Chi Minh City. Supported by Elton John AIDS Foundation, TestSGN has the same aim of increasing the uptake of HIV testing among young men who have sex with men (YMSM) in the city.

Containing lingos that are often only understood by gay audiences, the campaign’s slogan – Top. Bot. Test. Repeat. – highlights the direction of TestSGN while stimulating the target audiences’ curiosity. [1]

Vietnam is the sixth country in the region with the most alarming epidemic rate among MSM. UNAIDS’ most recent estimates indicate that national HIV prevalence among Vietnamese MSM is 6.7 per cent. The prevalence in Ho Chi Minh City alone, however, is much more startling – 15 per cent. Almost two out of ten MSM in Ho Chi Minh City are HIV positive. Yet, only 39% of MSM received an HIV test in the last 12 months and know their results. TestSGN is born to change these worrying statistics.

APCOM’s TestXXX initiative understands that ensuring a developmental approach to providing and promoting HIV services refers to the importance of life phase or age in understanding a person’s attitude towards and likelihood to engage in risky behaviours or to access HIV services. This means, first and foremost, TestSGN focuses on reducing the incidence of HIV among young MSM.

Young people in urban setting like Ho Chi Minh City live a significant part of their lives online – including to find sexual partners. Thus, TestSGN is set to deliver online outreach that would provide a strategic source of information that will complement offline HIV responses such as peer-to-peer outreach. 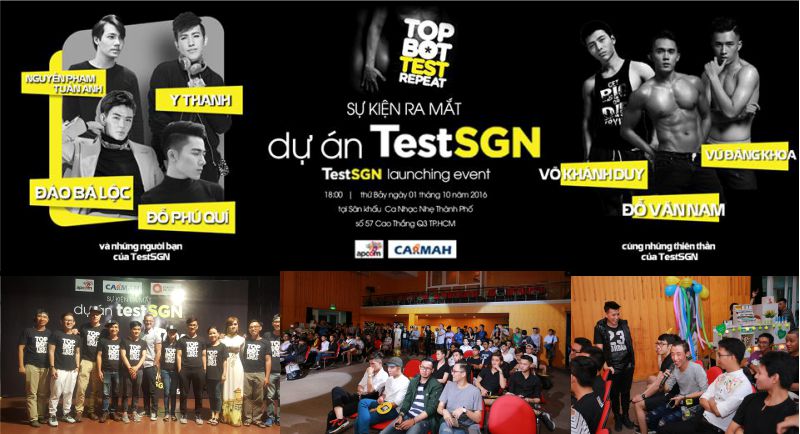 A brand activation event was held to signify the launch of the campaign – physically and digitally. Taking place at the city’s renowned theater hall in mid-September, stage performances by local artists, dissemination of branding and outreach materials and raffle prizes were experienced by hundreds of young MSM.

“Seeing so many young gay men come together to celebrate the launch of TestSGN and hear the important messages of testing for HIV and knowing their status was very heartening,” remarked Bao Le, Director of CARMAH.

“We are very excited about the launch of the innovative TestSGN campaign. Through engaging and positive social media content produced by Vietnamese young MSM themselves it will increase HIV testing and treatment,” noted Anne Aslett, Executive Director of the Elton John AIDS Foundation, the key funder of the campaign.

Two campaign videos encouraging HIV testing in a short, witty storyline that are relatable to YMSM were showcased in the event, along with the proclamation of TestSGN’s online platforms. The videos are viewable and shareable via TestSGN’s website, Facebook page and YouTube channel, hoping to follow the virality of TestBKK’s campaign videos.

“Getting tested regularly for HIV is an important part of YMSM’s lives. Early diagnosis ofa HIV infection increases the likelihood of early treatment, which will make YMSM who are tested positive live a healthy life,” explained Midnight Poonkasetwattana, Executive Director of APCOM. “TestSGN and TestBKK are part of APCOM’s regional effort to make HIV testing a regular behaviour of YMSM in urban cities.”

Keep your eyes open for APCOM news for the next cities set to launch TestXXX.