TestXXX, APCOM’s city-based HIV testing campaign that is piloted in Bangkok (TestBKK) and expanded to Ho Chi Minh City (TestSGN) has once again spread its wings to a new city: Manila, the capital of the Philippines – under the name of TestMNL.

The campaign is led by LoveYourself – a local community organisation that has been providing and advocating for HIV and sexual rights and health services among key populations in the Philippines. Embarking with the same daring “Suck. F*#k. Test. Repeat” slogan like its Bangkok predecessor, TestMNL has the same goal of increasing the uptake of HIV testing among young gay and bisexual men and other men who have sex with men (MSM) in Manila – a home to more than 1.7 million people.

The Philippines is known for its alarming and escalating rate of HIV prevalence among MSM in the past years. As of December 2016, HIV/AIDS and ART Registry of the Philippines recorded 750 new HIV cases, 80% of those were through male to male sexual contact; and 29% belong to the 15-24 age range. UNAIDS’ most recent dataindicates that HIV testing coverage among MSM in the country only covers 16% of the demography. Less than two out of 10 MSM in the country check their HIV status regularly.

Funded by Elton John AIDS Foundation, APCOM’s TestXXX initiative understands that ensuring a developmental approach to providing and promoting HIV services signifies the importance of life phase or age in understanding a person’s attitude towards and likelihood to engage in risky behaviours and to access HIV services. This means, first and foremost, TestMNL focuses on reducing the incidence of HIV among young MSM.

Young MSM in urban setting like Manila live a significant part of their lives online – including to find sexual partners. Thus, TestMNL is set to deliver online outreach that will complement the existing offline interventions to increase the traffic of their 8 gay-friendly clinic partners across Metro Manila. Their first campaign videos have just been released and start to get viral on social media.

TestMNL was excitingly unveiled by LoveYourself at their third installment of annual date auction for a cause, titled Cherry Poppin’, on 25 February at One Canvas Events Place, Makati City. Dozens of gorgeous Filipino gay men were auctioned for a date night and the collected fund would be used by LoveYourself to mobilise their HIV advocacy and service resources. 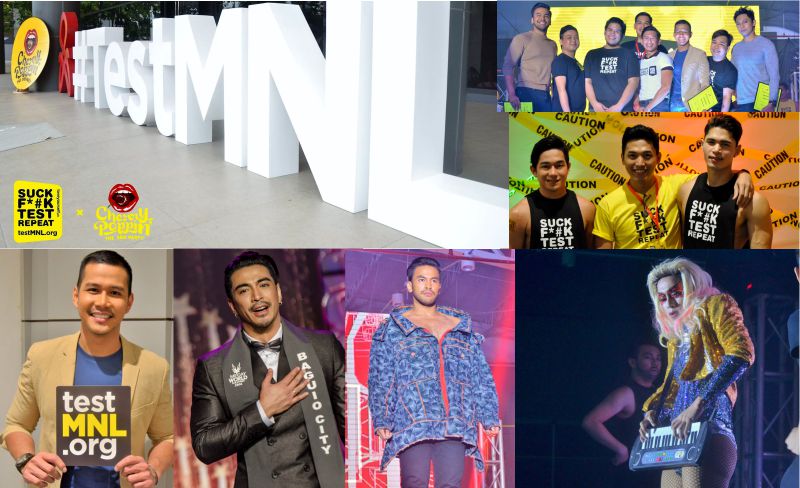 “LoveYourself is reinforcing the HIV advocacy with TestMNL,” LoveYourself Executive Director Ronivin Pagtakhan said. “[TestMNL] is aiding the information gap among the vulnerable populations like the young MSM.”

Following up the launching event, TestMNL is more than ready to replicate TestBKK’s success on blending creativity, technology innovation and community involvement to change the attitude and behaviour of young MSM towards their sexual health. New out-of-box online intervention as well as exclusive outreach at key events are expected to come.

“APCOM has to thank the Elton John AIDS Foundation in its vision to see an AIDS free future, and their commitment in Asia. The partnership with the Foundation not only promotes innovative HIV testing campaign, but also empowers the community to take leadership and lead the response that will ensure consistent HIV information and branding across major urban centres,” APCOM Executive Director Midnight Poonkasetwattana said. “The campaign can also integrate information on other innovations such as PrEP and HIV self-testing. APCOM is proud to be working with the LoveYourself in the roll out in the Philippines.”

APCOM will also work with new funders and new national partners to roll out TestXXX in more cities in Asia. Follow us on our social media platforms to get the firsthand updates on TestXXX.